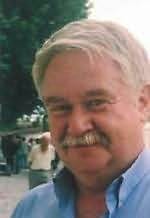 (b.1952)
Mike Ripley is the author of the award-winning 'Angel' series of comedy thrillers which have twice won the CWA Last Laugh Award. It has been said that he 'paints a picture of London Dickens would recognise' and that 'he writes like the young Len Deighton, wierd and wonderful information and very, very funny'. Described as 'England's funniest crime writer' (The Times), he is also a respected critic of crime fiction, writing for the Daily Telegraph, The Guardian, The Times and the Birmingham Post among others.

The Serpent's Tale (2008)
(Mistress of the Art of Death, book 2)
Ariana Franklin
"An outstanding historical mystery. Well-researched, well-plotted, well-paced and above all well written."

Inspector Ghote's First Case (2008)
(Inspector Ghote, book 25)
H R F Keating
"Ghote's great strength as a detective, and as a character, is that he is always underestimated by his opponents."

The Maze of Cadiz (2008)
(Peter Cotton, book 1)
Aly Monroe
"So convincing and so well-written...I have trouble believing it is a first novel."

Star Island (2010)
(Skink, book 6)
Carl Hiaasen
"Hiaasen back on top acidic form as he deflates the dirigible of celebrity in pop music with a blast of well-aimed buckshot whilst keeping some of his powder dry for his favourite target: Florida property developers."