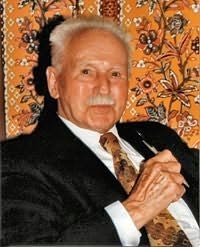 (1898 - 1988)
Originally intending to be a career soldier, Price graduated from the United States Military Academy at West Point; he served in the American Expeditionary Force in World War I, and with the American military in Mexico and the Philippines. He was a champion fencer and boxer, an amateur Orientalist, and a student of the Arabic language; science-fiction author Jack Williamson, in his 1984 autobiography Wonder's Child, called E. Hoffmann Price a "real live soldier of fortune."

In his literary career, Hoffmann Price produced fiction for a wide range of publications, from Argosy to Terror Tales, from Speed Detective to Spicy Mystery Stories. Yet he was most readily identified as a Weird Tales writer, one of the group who wrote regularly for editor Farnsworth Wright, a group that included Lovecraft, Robert E. Howard, and Clark Ashton Smith. Price published 24 solo stories in "the Unique Magazine" between 1925 and 1950, plus three collaborations with Otis Adelbert Kline, and his works with Lovecraft.