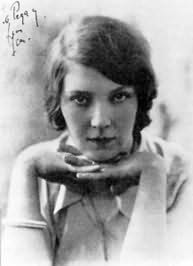 (Ella Gwendoline Rees Williams)
Dominica (1890 - 1979)
Jean Rhys originally Ella Gwendolen Rees Williams, was a Caribbean novelist who wrote in the mid 20th century. Her first four novels were published during the 1920s and 1930s, but it was not until the publication of Wide Sargasso Sea in 1966 that she emerged as a significant literary figure. A "prequel" to Charlotte Brontë's Jane Eyre, Wide Sargasso Sea won a prestigious WH Smith Literary Award in 1967.

Rhys was born in Dominica (a formerly British island in the Caribbean) to a Welsh father and Scottish mother. She moved to England at the age of sixteen, where she worked unsuccessfully as a chorus girl. In the 1920s, she relocated to Europe, traveling as a Bohemian artist and taking up residence sporadically in Paris. During this period, Rhys lived in near poverty, while familiarising herself with modern art and literature, and acquiring the alcoholism that would persist through the rest of her life. Her experience of a patriarchal society and feelings of displacement during this period would form some of the most important themes in her work.