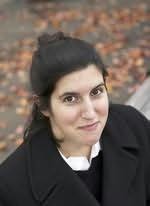 Curtis Sittenfeld is the author of the bestselling novels Prep and The Man of My Dreams, which are being translated into twenty-five languages. Prep also was chosen as one of the Ten Best Books of 2005 by The New York Times, nominated for the UK's Orange Prize, and optioned by Paramount Pictures. Curtis won the Seventeen magazine fiction writing contest in 1992, at age sixteen, and since then her writing has appeared in many publications, including The Atlantic Monthly, Salon, Glamour, and on public radio's This American Life. A graduate of Stanford University and the Iowa Writers' Workshop, she was the 2002 - 2003 writer in residence at St. Albans School in Washington, D.C.

If You Follow Me (2010)
Malena Watrous
"I love, love, love If You Follow Me. It's fearlessly honest, occasionally heartbreaking, and extremely funny, and I can't recommend it highly enough."

Life Would Be Perfect If I Lived in That House (2010)
Meghan Daum
"Wonderful... It's like having a no-holds barred conversation with your smartest, funniest friend."

Stiltsville (2010)
Susanna Daniel
"A deeply engrossing tale of love, family, friendship, and motherhood. Stiltsville is both an elegantly crafted work of art and a great read."

The Girl Below (2012)
Bianca Zander
"So real and moving, so funny and smart, so sharp and artful."

Do Not Become Alarmed (2017)
Maile Meloy
"She's such a talented and unpredictable writer that I'm officially joining her fan club; whatever she writes next, I'll gladly read it."

Women Talking (2018)
Miriam Toews
"Irresistible . . . its intelligence, its honesty and, above all, its compassion provide a kind of existential balm--a comfort not unlike the sort you might find by opening a bottle of wine and having a long conversation with (yes, really) a true friend."

The Caregiver (2018)
Samuel Park
"A rich and poignant tale of human nature at its best and worst, depicted with elegance and compassion."