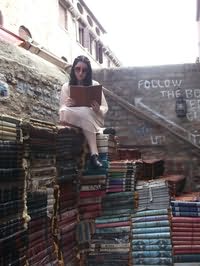 Melinda Salisbury lives by the sea, somewhere in the south of England. As a child she genuinely thought Roald Dahls Matilda was her biography, in part helped by her grandfather often mistakenly calling her Matilda, and the local library having a pretty cavalier attitude to the books she borrowed. Sadly she never manifested telekinetic powers. She likes to travel, and have adventures. She also likes medieval castles, non-medieval aquariums, Richard III, and all things Scandinavian The Sin Eater's Daughter is her first novel. She can be found on Twitter at @AHintofMystery, though be warned, she tweets often.

The Wanderers (2015)
(Wanderers , book 1)
Kate Ormand
"The Wanderers is a dark, rich, and original story. I love the concept of humans with inherent shape-shifting abilities, and the circus setting is incredibly vivid?I could smell the musty, musky ring, feel the bright lights burning my skin. Kate has created an intricate and danger filled world that's both cruel and beautiful."

The Fandom (2018)
(Fandom, book 1)
Anna Day
"I couldn't put it down, and honestly, I can't wait to pick it back up. Utterly compulsive, relentlessly paced, and cleverly plotted."

Harrow Lake (2020)
Kat Ellis
"A taut, twisting and terrifying read that takes no prisoners as it carves and claws its way into your nightmares. Expect more than just jitters..."

All About Us (2020)
Tom Ellen
"Clever, funny and romantic. I hope the Netflix adaptation comes swiftly after."