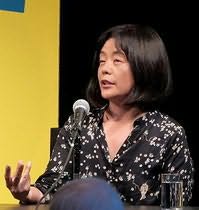 (b.1960)
Yko Tawada ( Tawada Yko, born March 23, 1960) is a Japanese writer currently living in Berlin, Germany. She writes in both Japanese and German.

Tawada was born in Tokyo, received her undergraduate education at Waseda University in 1982 with a major in Russian literature, then studied at Hamburg University where she received a master's degree in contemporary German literature. She received her doctorate in German literature at the University of Zurich. In 1987 she published Nur da wo du bist da ist nichtsAnata no iru tokoro dake nani mo nai (A Void Only Where You Are), a collection of poems in a German and Japanese bilingual edition.

Tawada's Missing Heels received the Gunzo Prize for New Writers in 1991, and The Bridegroom Was a Dog received the Akutagawa Prize in 1993. In 1999 she became writer-in-residence at the Massachusetts Institute of Technology for four months. Her Suspect on the Night Train won the Tanizaki Prize and Ito Sei Literary Prize in 2003.

Tawada received the Adelbert von Chamisso Prize in 1996, a German award to foreign writers in recognition of their contribution to German culture, and the Goethe Medal in 2005.
Novels
The Naked Eye (2009)
Portrait of a Tongue (2013)
The Emissary (2018)
The Last Children of Tokyo (2018)

Novellas
The Bridegroom Was a Dog (2012)