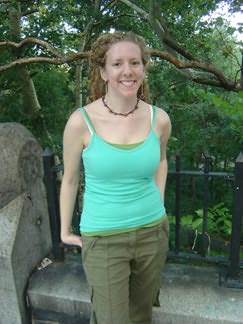 (b.1978)
Robin Wasserman (born May 31, 1978) is an American young adult novelist. In addition to other books, she is the author of the Seven Deadly Sins series from Simon & Schuster, featuring seven morally bankrupt teenagers in a small California town. Each novel revolves around one of the sins, and each character's transgressions specific to that sin. Which follow the lives of Harper, Beth, Adam, Kane, Miranda, Reed, Kaia, and their French teacher, Jack Powell.

Wasserman grew up outside of Philadelphia and graduated from Harvard University and UCLA. Before she was an author she was an associate editor at a children's book publisher. She is currently living in Brooklyn, New York.

Oz Reimagined
One Flew Over the Rainbow (2013)

We Were Liars (2014)
E Lockhart
"I've fallen in love with every E. Lockhart book I've ever read (and I've read them all), but We Were Liars blows them all out of the water. Dark, gripping, heartrending, and terrifyingly smart, this book grabs you from the first page--and will never let go."

The Leaving (2016)
Tara Altebrando
"As heart-stopping as it is heart-breaking, The Leaving layers a wildly strange suspense story over a lovely and unexpected narrative of grief, loss, and the struggle to imagine a future in the shadow of the past."

The Fall of Lisa Bellow (2017)
Susan Perabo
"A searingly smart and painful exploration of aftermath - the voids left in tragedy's wake, the truths that can never be spoken. To be the one left behind: Perabo never shies away from how much this can hurt. But in her hands, what seems at first like a story of loss ultimately becomes a narrative of renewal and an unforgettable portrait of mothers, daughters, and the tangle of desperation, fear, history, confusion, and love that binds them together."

Aftercare Instructions (2017)
Bonnie Pipkin
"A riveting novel as powerful as it is essential."

The Storm King (2018)
Brendan Duffy
"Brendan Duffy owes me several nights of sleep, because once I finished the first chapter of his novel, I couldn’t stop turning the pages until I’d read every thrilling, unsettling, heartbreakingly lovely last one of them. Duffy’s novel is, on the surface, a gripping murder mystery—but beneath that lies a love story, a cautionary coming-of-age tale, and a devastating meditation on violence and loss. A whirlwind of intrigue, vengeance, and wild longing, The Storm King will sweep you off your feet and blow you away."

Fruit of the Drunken Tree (2018)
Ingrid Rojas Contreras
"From its unforgettable opening image to its heartbreakingly perfect final line, Fruit of the Drunken Tree casts an irresistible spell, summoning us into the fierce, perilous world of two young girls in a nation on the brink. Ingrid Rojas Contreras's lush language finds hidden beauty in even the ugliest pain. A stunning debut."

Barker House (2020)
David Moloney
"David Moloney's Barker House aims its razor-sharp gaze at the machinery of mass incarceration--and the men and women at its controls. Moloney's frank and humanizing depiction is lush with regret, longing, cruelty, and hope, resulting in a novel as unflinching as it is unforgettable. A brutal and beautiful portrait of lives shaped--and warped--by a toxic system."

Catherine House (2020)
Elisabeth Thomas
"With this astonishing debut, Elisabeth Thomas has conjured an immersive, intoxicating world that left me as reluctant as its characters were to leave it behind. I inhaled the novel in a single, glorious weekend, but Catherine House and its denizens will linger with me for a very long time."

These Violent Delights (2020)
Micah Nemerever
"As unsettling as it is enthralling, These Violent Delights will engulf you: first in the intoxication of obsession, then in its toxic consequences. Micah Nemerever's debut is a beautiful portrait of intimacy, desperation, and the damage that damaged hearts can cause. It shattered me."
Visitors to this page also looked at these authors
Maggie Stiefvater
Scott Westerfeld
Neal Shüsterman
Cecily von Ziegesar
Rachel Vincent
Kasie West
James Patterson
Peter Swanson
Elizabeth Wein
Vivian Vande Velde
Jonathan Stroud
Jude Watson
Susan Wiggs
Christine Feehan
Wendelin Van Draanen
Nicholas Sparks