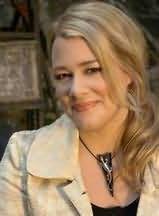 (b.1975)
Robyn Young was born in Oxford and grew up in the Midlands and a fishing village in Devon, during which time she won awards for poetry and edited a regular page in a regional newspaper.  After hitchhiking to Brighton at 19, she worked as a festival organiser, a music promoter and a financial advisor.  She wrote two novels before gaining a Masters in Creative Writing at the University of Sussex.  Her first published novel, Brethren, went straight into the Sunday Times top ten, where it remained for five weeks, becoming the bestselling hardback debut of the year.  It entered the New York Times top twenty on publication in the US and was named book of the year by German newspaper Bild.  Her second novel, Crusade, reached number 2 and Requiem completed the trilogy.  In 2007, Robyn was named one of Waterstones twenty-five authors of the future judged by a panel of one hundred industry insiders who were asked to nominate the authors they believed would contribute the greatest body of work over the next quarter century.

The Marlowe Papers (2012)
Ros Barber
"A rare find indeed - searing poetry meets compelling narrative in a historical tour de force that had me ripping through the pages."