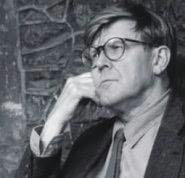 (b.1934)
Alan Bennett is an English author and actor noted for his work, his boyish appearance and his sonorous Yorkshire accent. He was born in Armley in Leeds, Yorkshire. The son of a Co-op butcher, Bennett attended Leeds Modern School (a former state grammar school), learned Russian at the Joint Services School for Linguists during his National Service, and gained a place at Cambridge University. However, having spent time in Cambridge during national service, and partly wishing to follow the object of his unrequited love, he decided to apply for a scholarship at Oxford University. He was accepted by Exeter College, Oxford University and went on to receive a first-class degree in history. While at Oxford he performed comedy with a number of future successful actors in the Oxford Revue. He was to remain at Oxford for several years researching and teaching Medieval History before deciding he was not cut out to be an academic.