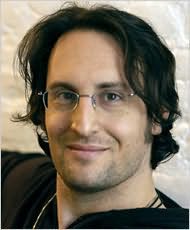 (b.1970)
Charles Bock is the author of the novel Beautiful Children, which was a New York Times bestseller and notable book of the year, and won the Sue Kaufmann Prize for best first novel from the American Academy of Arts and Letters. His fiction and non-fiction has appeared in Harper's, Esquire, The New York Times, Los Angeles Times, Slate, AGNI, and the Iowa Review, as well as in numerous anthologies. He's received fellowships from the Civitella Ranieri foundation in Umbria Italy, Yaddo, UCross, and the Vermont Studio Center.
Novels
Beautiful Children (2008)
Alice & Oliver (2016)

A Day and a Night and a Day (2009)
Glen Duncan
"Delivers an astonishingly heady and warm and enthralling read. This is the good stuff."

The Visibles (2009)
Sara Shepard
"The Visibles is that rarest of accomplishments -- a novel that pulls you into its world, then just...keeps...getting...better. Sara Shepard writes with a grace and ease, but don't be deceived -- the big stuff is in here: coming of age; New York in the nineties; the complications of family and friendship; illness and ambition; hope and disappointment and redemption. On every page you'll find an architect's control, a painter's eye, a dancer's elegance, and, best of all, an unending well of generosity. The Visibles is what you want from fiction. Enjoy."

Asymmetry (2018)
Lisa Halliday
"Wow. Asymmetry is a rare book in the sense that it is always shocking to read something this good and polished and fully formed, a novel that impossibly seems to be everything at once: transgressive and intimate and expansive, torn from today's headlines, signifier of the strange moment we now occupy. Somehow this book, this author has all but exploded into the world, fully formed. Lisa Halliday is an amazing writer. Just open this thing, start at the beginning."

Ohio (2018)
Stephen Markley
"Ohio is that rarest of unicorns, a novel that swings for the fences, and actually tries to explain just what the fuck happened to this country after the towers fell, and how we got to this awful particular moment. Stephen Markley goes for the universe with every single sentence he writes. That the universe answers him as often as it does makes for a hugely impressive first novel."

The Brightest Place in the World (2020)
David Philip Mullins
"My life stopped for two days while I read this novel. The Brightest Place in the World accomplishes what only our best art attempts. In these pages, David Philip Mullins tracks the vagaries and desires of people we recognize as they deal with the unthinkable: illicit sex, crazy scams, betrayals, loneliness. This book is a love letter to Las Vegas, the western desert, and, most of all, the mysteries of the human heart."
Visitors to this page also looked at these authors
T C Boyle
Roberto Bolaño
Barbara Taylor Bradford
Terri Blackstock
James Carlos Blake
Lisa Black
Ray Bradbury
Larry Bond
Giles Blunt
Elizabeth Buchan
ReShonda Tate Billingsley
Ann Brashares
Wanda E Brunstetter
Matt Bondurant
Jill Bialosky
Carrie Brown