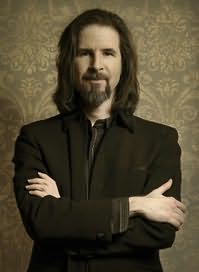 (b.1965)
Gerald Brom is an American gothic fantasy artist and illustrator. Born the son of a U.S. Army pilot he spent much of his early years on the move, living in many countries such as Japan and Germany. Brought up as a military dependent he was known by his last name only, and now signs his name as simply Brom.
Novels
The Child Thief (2009) (with Brom)
Krampus: The Yule Lord (2012) (with Brom)