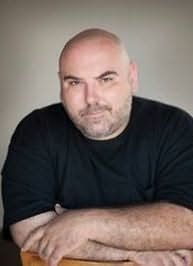 R.S. (Rod) Belcher is an award-winning newspaper and magazine editor and reporter.

Rod has been a private investigator, a DJ, a comic book store owner and has degrees in criminal law, psychology and justice and risk administration, from Virginia Commonwealth University. He’s done Masters work in Forensic Science at The George Washington University, and worked with the Occult Crime Taskforce for the Virginia General Assembly.

He lives in Roanoke, Virginia with his children, Jonathan and Emily.

The Emperor's Blades (2013)
(Chronicle of the Unhewn Throne, book 1)
Brian Staveley
"Takes a story of family, loss, conspiracy and revenge and gives it new legs. It's epic fantasy with a sharp, jagged edge to it, a modern sensibility, prose as tight as the leather wrapped around a sword's hilt, and characters that you can relate to and give a damn about. I look forward to the next installment of Staveley's chronicle."

Alice (2015)
(Chronicles of Alice, book 1)
Christina Henry
"A dark, delightfully disturbing fall down a rabbit hole of madness and mystery. This is not your mamma’s Alice."

The Midnight Front (2018)
(Dark Arts , book 1)
David Mack
"The Dark Arts series hits the ground running. Exciting and smart, David Mack's secret history of World War II and the occult heroes and villains that fought it will keep you up well past midnight."