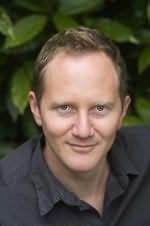 (b.1973)
Chris Cleave is a novelist and is currently moonlighting as columnist for The Guardian newspaper in London.

His debut novel Incendiary was an international bestseller published in 20 countries to awards and critical acclaim. A controversial open letter to Osama bin Laden,Incendiary gained notoriety for the macabre coincidence of its UK publication on 7th July 2005, the day of the London terrorist bombings.

Inspired by his early childhood in West Africa and by an accidental visit to a British concentration camp, Cleave’s second novel is entitled The Other Hand in the UK, Australia, New Zealand and South Africa. It is entitled Little Bee in the US and Canada.

Union Atlantic (2010)
Adam Haslett
"An enthralling, lucid and superbly confident work of art that grips from the first page... This is a big novel and a masterful debut."

Eleven (2010)
Mark Watson
"I hugely recommend. Gentle, compassionate, unusual, and thought-provoking. Expected a fun read and got something better."

Come to the Edge (2012)
Joanna Kavenna
"An absolute knock-out - had me laughing again and again."

In The Shadow Of The Banyan (2012)
Vaddey Ratner
"A masterpiece... utterly heartbreaking and impossibly beautiful."

The Rosie Project (2013)
(Don Tillman, book 1)
Graeme Simsion
"The Rosie Project is an upbeat, quirky, impertinent gem of a read. As the novel makes its logically irrefutable progression, readers will become enchanted by what may well be the world’s first rigorously evidence-based romantic comedy."

Lover (2016)
Anna Raverat
"Anna Raverat is a humane and generous writer, giving voice to our best instincts and communicating, by quiet and often funny moments, a sense of our ability to overcome adversity with love."

My Name Is Leon (2016)
Kit de Waal
"Authentic and beautiful, urgent and honest, this novel does what only the best do: it quietly makes room in your heart."