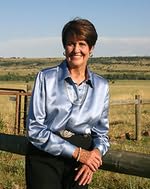 (b.1937)
Margaret Coel is the New York Times bestselling, award-winning author of the acclaimed novels featuring Father John O'Malley and Vicky Holden, as well as several works of nonfiction. Originally a historian by trade, she is considered an expert on the Arapaho Indians.

A Deadly Arrangement (2001)
(Feng Shui, book 1)
Denise Osborne
"Denise Osborne has crafted an intelligent and altogether riveting mystery, and Salome Waterhouse is a likeable sleuth with one-heck of an interesting sideline."

Knit One, Kill Two (2005)
(Knitting Mystery, book 1)
Maggie Sefton
"Maggie Sefton has knit together a mystery with more twists and turns than the scrumptious yarns in the fictional shop of Lambspun. This is a clever, fast-paced plot, with a spunky sleuth and a cast of fun, engaging characters."

Spoon (2009)
Robert Greer
"An enormously engaging novel with characters who feel like old friends and a spirit as big as the West. From the opening paragraphs, you are in the hands of a master with the ability to evoke the grandeur of the still untamed western landscape and the folks whose lives are shaped by it. What a gifted storyteller Robert Greer is! Spoon is the kind of story you will remember."

Deadly Currents (2011)
(RM Outdoor Adventures Mystery, book 1)
Beth Groundwater
"If you've wondered what white water river rafting is all about, get ready for a wild plunge into Colorado's Arkansas River with Mandy Tanner, river ranger extraordinaire and dauntless sleuth. Beth Groundwater gets the mountain town of Salida and its cast of river denizens just right.  Hurray for Deadly Currents, a heart-racing debut to a new series with as many twists and turns and unexpected upsets as a ride through the rapids itself."

The Spirit is Willing (2014)
(Ophelia Wylde Paranormal Mystery, book 2)
Max McCoy
"McCoy has a gift for capturing the old west in all its colorful and outrageous glory."

Killing Trail (2015)
(Timber Creek K-9 Mystery, book 1)
Margaret Mizushima
"A terrific debut with a refreshing detective duo--Deputy Mattie Lu Cobb and Robo, her K-9 partner! Margaret Mizushima has crafted a compelling and savvy mystery that explores the big secrets in a small western town. I was cheering on Mattie and Robo every step of the way."

Jane's Baby (2018)
Chris Bauer
"JANE'S BABY is a stunning thriller, pitch-dark and filled with twists you never see coming. Chris Bauer's complex cast of characters headed by bounty hunter Judge Drury and his K9 partner pulled me in from the beginning and never let go. Bauer is a novelist to watch."

Path of the Dead (2018)
(Arthur Nakai Mystery, book 1)
Mark Edward Langley
"A dark and gripping novel, filled with suspense and heart-stopping twists you won't see coming. Surely Arthur Nakai, Navajo outfitter and ex-member of the Shadow Wolves, trained to hunt down criminals on the border, is one of the most compelling sleuths to come along in some time. Path of the Dead is a smash debut. Don't miss it."

The Clincher (2018)
(Horseshoer Mystery, book 1)
Lisa Preston
"Fast-paced, absorbing and fun to boot, The Clincher grabs your attention from the first paragraph and never loosens its grip. Rainy Dale?horseshoer with sass?is one of the freshest and most original sleuths to come along in mystery fiction. May she live on and on!"

Death in the Family (2020)
(Shana Merchant, book 1)
Tessa Wegert
"A deliciously complicated locked-room mystery that would make Agatha Christie proud. Add a savvy sleuth battling her own demons and the result is an up-to-date and thrilling ride. Death in the Family definitely deserves a place on your must-read list."

The King's Beast (2020)
(Mystery of Colonial America, book 6)
Eliot Pattison
"A gripping tale of risk and adventure with a mystery at its core, characters who may or may not be who they seem, and a plot that twists in surprising directions. Eliot Pattison thrusts you into pre-Revolutionary America and England, each boiling with conflict, dissension, and danger. If you are a fan of historical mysteries - and even if you aren’t - you don’t want to miss The King’s Beast."
Visitors to this page also looked at these authors
Michael Connelly
Anne Hillerman
Harlan Coben
C J Box
J A Jance
William Kent Krueger
Mary Higgins Clark
Lee Child
Ann Cleeves
Jeffery Deaver
Laura Childs
Cleo Coyle
Patricia Cornwell
Susan Wittig Albert
Reed Farrel Coleman
David Baldacci