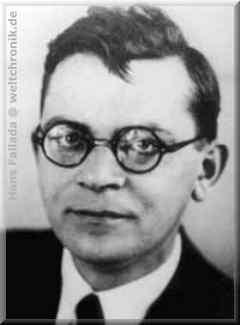 (Rudolf W F Ditzen)
Germany (1893 - 1947)
Hans Fallada was one of Germany's best-selling authors-ranking with Thomas Mann and Hermann Hesse - prior to the rise of the Nazis. But while those writers fled Germany, Fallada stayed. Refusing to join the Nazi Party, he suffered numerous difficulties, including incarceration in an insane asylum. After the war, he wrote Every Man Dies Alone based on an actual Gestapo file. He died just before its publication in 1947.