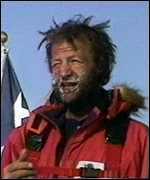 (b.1944)
Ranulph Fiennes was born in 1944 and educated at Eton. He served with the Royal Scots Greys for a time before joining the SAS. In 1968 he joined the Army of the Sultan of Oman and in 1970 he was awarded the Sultan's Bravery Medal. Since 1969, when he led the British Expedition on the White Nile, Ranulph Fiennes has been at the forefront of many exploratory expeditions. Dubbed the 'World's Greatest Living Explorer' by the Guinness Book of Records, his expeditions around the world include Transglobe, the first surface journey made around the world's polar axis, which took over two years to complete; several unsupported North Polar Expeditions; and the unassisted crossing of the Antarctic Continent, which also raised a great deal of money for charity. In 1993 Sir Ranulph Fiennes was awarded an OBE for 'human endeavour and charitable services'.

Ranulph Fiennes is the author of several books including A Talent for Trouble, Where Soldiers Fear to Tread, Hell on Ice, To the Ends of the Earth (written with his wife Virginia), his autobiography: Living Dangerously and Mind Over Matter: The Epic Crossing of the Antarctic Continent. His number one bestseller, The Feather Men, is also published in Signet.