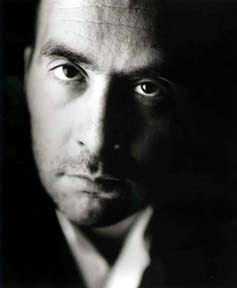 (b.1959)
Tibor Fischer was born in Stockport, England in 1959 to Hungarian parents, both professional basketball players who had left Hungary in 1956. He grew up in south London before going to Cambridge University to study Latin and French. His first novel, Under the Frog (1992), was shortlisted for the Booker Prize for Fiction. It tells the story of a Hungarian basketball player, Gyuri Fischer, dreaming of escape to the West while on a tour in 1950s Hungary.

His recent fiction includes The Thought Gang (1994), the adventures of a middle-aged philosopher turned bank robber; The Collector Collector (1997), the bizarre story of a pottery bowl; and Don't Read This Book If You're Stupid (2000), seven tales of alienated and marginalised characters.
Novels
Under the Frog (1992)
The Thought Gang (1994)
The Collector Collector (1997)
Voyage to the End of the Room (2003)
Good to Be God (2008)
How to Rule the World (2018)

Whatever (1998)
Michel Houellebecq
"L'Etranger for the Info generation."