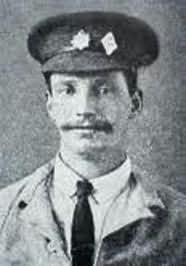 Little is known of his life. GR system bug adds January 1 to his birth date, but the actual date is unknown. Born in Kingston-upon-Thames in 1888, he married Dora Mary Hill and had one son and two daughters. He lived at The Great Quarry, Guildford. Before full-time writing, he had experience in journalism and publishing. He died at Aldershot in March 1969, aged 80.

Featured characters were Scotland Yard Inspector McLean, spy catcher Q33, Trooper O'Neill, cowboy Colorado Jim (Jack) and Nigel Rix. McLean appeared in The Weekly News even anonymously until 6 October 1979, ten years after Good child died, and inspired Dandy Inspector McLean Library published by D.C. Thomson. An early 1921 story in The Children's Newspaper was a rare contribution to the sci fi genre. Only a handful of his books are still in print, recently some republished in large print. Colorado Jim is the only one on gutenberg.org as of Jan 2012.