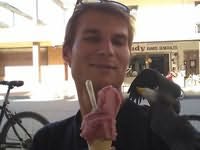 New Zealand (b.1989)
Aaron Hodges was born in 1989 in the small town of Whakatane, New Zealand. He studied for five years at the University of Auckland, completing a Bachelor’s of Science in Biology and Geography, and a Masters of Environmental Engineering. After working as an environmental consultant for two years, he grew tired of office work and decided to quit his job and explore the world. During his travels he picked up an old draft of a novel he once wrote in High School – titled The Sword of Light – and began to rewrite the story. Six months later he published his first novel – Stormwielder. And the rest, as they say, is history.