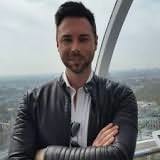 After graduating high school he moved on to university, gaining an Honors Degree in Information Technology. To support himself during his degree he worked a number of part time jobs, one of which was as an extra in television and feature films. Cast as a World War Two soldier, he was put through military boot camp in preparation for the role.

The experience piqued his interest in military history, and encouraged him to learn more about conflicts past and present. Having always enjoyed writing, he used this research as the basis for his first thriller, Redemption. He was able to supplement this with visits to weapon ranges in America and Eastern Europe, as well as research trips to Washington DC.

For his second thriller Sacrifice, he was able to interview members of the British armed forces who had served tours in Afghanistan.

He lives in Fife with his wife and two sons, and is currently writing the third novel in the Ryan Drake series, titled Betrayal