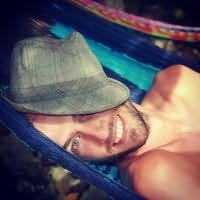 David Estes was born in El Paso, Texas but moved to Pittsburgh, Pennsylvania when he was very young. David grew up in Pittsburgh and then went to Penn State for college. Eventually he moved to Sydney, Australia where he met his wife. T
hey now live together in their dream location, Hawaii. A reader all his life, he began writing novels for the children's and YA markets in 2010, and started writing full time in June 2012. Now he travels the world writing with his wife, Adele. David's a writer with OCD, a love of dancing and singing (but only when no one is looking or listening), a mad-skilled ping-pong player, and prefers writing at the swimming pool to writing at a table.

Benjamin Ashwood (2016)
(Benjamin Ashwood, book 1)
AC Cobble
"Benjamin Ashwood is a classic fantasy tale reminiscent of Tolkien's The Hobbit. With likeable characters and vivid descriptions of setting, Cobble's storytelling keeps the pages turning late into the night. Once you pick up this book, you won't stop reading until the adventure is finished."

The Crimson Queen (2016)
(Raveling, book 1)
Alec Hutson
"Fans of George RR Martin and Will Wight will love The Crimson Queen by Alec Hutson. Hutson's prose is lyrical and spellbinding and will whisk you away to a world so vivid you can almost imagine you are living the adventure as it unfolds. A mesmerizing and grandiose tale that readers of epic fantasy will not want to miss!"

Web of Eyes (2018)
(Buried Goddess, book 1)
Rhett C Bruno and Jaime Castle
"A gritty, dark fantasy disguised as a lighthearted epic... Creativity and twists were yielded as effectively as swords and daggers. The diverse cast of characters are perfectly imperfect, which made them easy to cheer for. I am looking forward to the sequel!"

Death March (2018)
(Euphoria Online, book 1)
Phil Tucker
"Death March by Phil Tucker has all the best qualities of Ready Player One and Sufficiently Advanced Magic rolled into one awesome book that is the start to the next hot LitRPG series you absolutely cannot miss. Simply put: read this book, you won't be disappointed."

The Seclusion (2018)
Jacqui Castle
"If you love The Giver, you will love The Seclusion. Castle paints a well-developed world in a realistic possible future with a pair of unlikely heroes you want to cheer for. There are no easy victories in this dark, gritty dystopian that checks all the right boxes. Don't miss this adventure, you'll thank me later!"