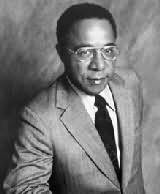 (1921 - 1992)
Alex Haley, an African American writer, is best known for as the author of the novel Roots: The Saga of an American Family, from which two television miniseries, Roots and Roots II, were adapted. The novels, loosely based on Haley's own family, presented an interpretation of the journey of African Americans from their homeland to the United States and their subsequent search for freedom and dignity. The novel was published in 1976, when the United States was celebrating it's bicentennial.

Haley began his writing career through assignments from Reader's Digest and Playboy magazine, where he conducted interviews. During this time he met Malcolm X, then one of the followers of Elija Mohamad, leader of the Nation of Islam. Later Haley was asked by Malcom X to write his life's story. The result of that collaboration, The Autobiography of Malcolm X, was published in 1965 and sold six million copies.

Roots, Haley's next bestseller, was a fictionalized version of his own search for his ancestral past, which led him to the African village of Juffure, in Gambia. Haley described Roots as "faction," a combination of fact and fiction. Although criticized by some for taking too many liberties in the telling of his journey into his ancestral past, Haley maintained that "Roots is intended to convey a symbolic history of a people."

The importance of Alex Haley and the impact of his work on television history should not be underestimated. To fully appreciate the contribution he made to medium, the African-American community and the country, his work must be examined within a context of changing demographics, historical events at home and abroad and, most important, the centuries-long struggle of a people to be recognized as full-fledged members of the national community.
Novels
Roots (1960)
A Different Kind of Christmas (1988)
Alex Haley's Queen (1993) (with David Stevens)
aka Queen
Mama Flora's Family (1998) (with David Stevens)