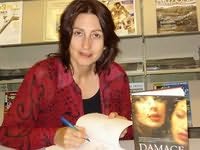 Denise Hamilton is a Los Angeles-based writer-journalist whose work has appeared in the Los Angeles Times, Wired, Cosmopolitan, Der Spiegel, and New Times. A reporter for the L.A. Times for ten years, she covered not only L.A. stories, but also the collapse of communism in Eastern Europe, the breakup of the Soviet Union, and burgeoning youth movements in Japan. A Fulbright scholar, she taught in the former Yugoslavia during the Bosnian War. She lives in a Los Angeles suburb with her husband and two young children. Her first novel, The Jasmine Trade, received wide acclaim and was a finalist for the Edgar, Anthony, Macavity, and WILLA Awards.

The Belen Hitch (2005)
(Sasha Solomon, book 2)
Pari Noskin Taichert
"With its sly humor, offbeat characters, and endearing sleuth, The Belen Hitch takes us on a vivid journey through New Mexico's culture, food, art, and landscape in search of a killer. As PR expert Sasha Solomon investigates the murder of a controversial artist--think sacrilegious Georgia O'Keeffe--she must also deal with the aftermath of her mother's stroke, a new beau, a cranky detective, forty-year-old secrets, and ghosts that won't stay dead. Taichert infuses her new mystery with such humanity and warmth that you'll come away glowing."

Literacy and Longing in L.A. (2006)
Jennifer Kaufman and Karen Mack
"A wonderful story that completely won me over - insecure bookish Dora will appeal to anyone who has ever found solace or inspiration in reading. This is chick lit for bookworms, at times breezy, sexy, profound..."

Ghosttown (2007)
(Whitney Logan Mystery, book 3)
Mercedes Lambert
"Lambert's Los Angeles is a wickedly funny, noir, edgy, grifty, politically incorrect Ellis Island West where Crash meets Day of the Locust with a little David Lynch thrown in. Lambert is a natural writer with a unique ear for LA argot, neighborhoods and characters. Anyone who loves contemporary noir and dark crime fiction should read the Dogtown Trilogy. You owe it to yourself."

Keep Your Friends Close (2014)
Paula Daly
"The suspense, dread and paranoia intensify with each page. Paula Daly explores what happens when a serpent invades the family nest, twisting truth into lies and illuminating our deepest fears. A novel that explores the power of family, love and betrayal, and what lengths we will go to keep our loved ones safe."