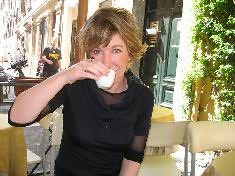 (b.1968)
Maria Hyland was born in London to Irish parents. When she was two years old her family moved to Australia, but returned to Dublin after a few years, where Hyland spent her early childhood. When she was eleven years old, the family once again travelled to Australia, settling in Melbourne. After finishing school she worked briefly in film and television - appearing uncredited in an episode of Carson's Law and working for a time as a Director's Assistant on the Hinch program - before completing an Arts/Law degree at the University of Melbourne in 1996. She worked as a lawyer for about six years. In 2004 she completed a M.A. in English at the University of Melbourne.
Novels
How the Light Gets In (2003)
Carry Me Down (2006)
This Is How (2007)
Even Pretty Eyes (2022)

The Waiting Room (2016)
Leah Kaminsky
"Kaminsky’s prose is deft and delicate, and this novel tackles the haunting of the Holocaust with a tough and remarkably unsentimental gaze."