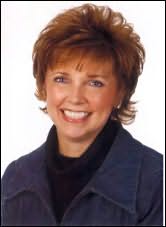 Award-winning, best-selling author Metsy Hingle says writing romance novels seemed a perfect career choice for her since she grew up in one of the world's most romantic cities -- New Orleans. "I'm a true romantic who believes there's nothing more powerful or empowering than the love between aman and a woman. That's why I enjoy writing about people who face life's challenges and triumph with laughter and love."

Dubbed by Romantic Times as " . . . destined to be a major voice in series romance," Metsy has gone on to make that prediction a reality, with her books frequently appearing on national bestseller lists and garnering awards--among them the R.W.A.'s prestigious Golden Heart Award, and both a W.I.S.H. Award and a nomination for Best Silhouette Desire by Romantic Times Magazine.

As much as Metsy loves being an author, it's her role as wife and mother that she holds most dear. Recently she turned in her business suits and fast-paced life in the hotel and public relations arena to pursue writing full time.

Collections
Passionately Ever After / Lonetree Ranchers - Colt (2004) (with Kathie DeNosky)

Dynasties the Connellys
And the Winner Gets... Married! (2002)