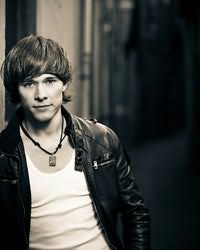 When Olde Heuvelt was three, his father died, and his mother raised him and his sister alone. Since 2007 he lives downtown in 's Hertogenbosch (Den Bosch).

Olde Heuvelt took courses in writing and graphical design at the Utrecht School of Arts, after which he studied American Studies at the Radboud University Nijmegen. He also attended the University of Ottawa in Canada, taking courses including "Fiction of Horror" and "Witchcraft, Magic and the Occult Tradition." When he was sixteen, he began to write the manuscript of what would become his debut novel, De Onvoorziene, which was published when he was nineteen by Dutch publisher Intes International and released in September, 2002. Two years and various enthusiastic reviews later, his second novel PhantasAmnesia, a supernatural thriller which combines horror with humor and satire, was published.


Thomas Olde Heuvelt is a prodigy of the fantastic genre in The Netherlands. He has been Guest of Honor at all the major fantasy festivals and conventions in The Netherlands and Belgium and his stories and essays have appeared in various anthologies and magazines.In 2004 he won the debut prize in the Paul Harland short storycontest. He was a jury member in the Unleash Award contest several times and was asked to be an editor for the anthology 'DuistereParels', for which he also wrote the foreword.

The author is also a member of the Horror Writers Association.

Besides being a writer, Thomas Olde Heuvelt is a passionate mountain climber and guitar player.