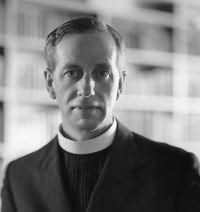 (1888 - 1957)
Ronald Arbuthnott Knox was a British cleric. He was born in Knibworth, Leicestershire, the son of the Bishop of Manchester, and was the brother of the writer EV Knox. He was educated at Eton and Oxford, and worked in Military Intelligence during WW1. He was ordained into the Anglican church in 1911 and converted to Roman Catholicism in 1917, being re-ordained as a Catholic priest soon after. Knox achieved many academic prizes and honours. He lectured and acted as Catholic chaplain to Oxford University until 1939, when he retired to translate the Bible. He wrote many other books on religion and other topics.