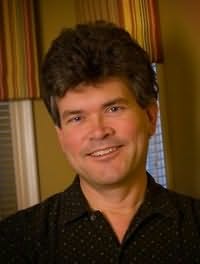 aka E C Blake, Lee Arthur Chane
Born in Silver City, New Mexico, Edward Willett grew up in Weyburn. He studied journalism at Harding University in Searcy, Arkansas, returning to Weyburn as a reporter for, and eventually news editor of, the Weyburn Review. In 1988 he became communications officer for the Saskatchewan Science Centre; he's been a fulltime freelance writer since 1993. As a writer, Ed has written more than 40 books of fiction and non-fiction for adults and children, winning award provincially and nationally. He is Writer-in-Residence at the Regina Public Library for 2011-2012. As an actor, Ed has performed in numerous plays and musicals with many of Saskatchewans theatre companies.

Andy Nebula: Interstellar Rock Star
1. From the Street to the Stars (2020)

Collections
Paths to the Stars (2018)

Novellas
The Loyal Spectre, or the True Hearts of Atlanta (2018)