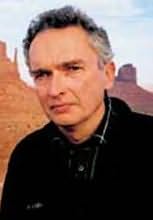 aka Owen Parry
Ralph Peters is a novelist, an essayist, a former career soldier, and an adventurer in the 19th-century sense. He is the author of a dozen critically acclaimed novels, two influential works on strategy, "Beyond Terror" and "Fighting for the Future".

Mr. Peters' works can also be found under the pen name "Owen Parry." He also appears frequently as a commentator on television and radio networks.

Kingdom's Swords (2002)
(Starfist, book 7)
Dan Cragg and David Sherman
"CAUTION! Any book written by Dan Cragg and David Sherman is bound to be addictive, and this is the first in what promises to be a great adventure series. First to Fight is rousing, rugged, and just plain fun. The authors have a deep firsthand knowledge of warfare, an enthralling vision of the future, and the skill of veteran writers. Fans of military fiction, science fiction, and suspense will all get their money's worth, and the novel is so well done it will appeal to general readers as well. It's fast, realistic, moral, and a general hoot. First to Fight is also vivid, convincing-and hard to put down. Sherman and Cragg are a great team! I can't wait for the next one!"

Black Storm (2002)
(Dan Lenson, book 7)
David Poyer
"I've been a David Poyer fan for over a decade and his storytelling abilities - always first-rate - just get better and better. Black Storm is a timely, gripping, compelling yarn told by a master."

Putin's Gambit (2017)
James O Born and Lou Dobbs
"An engaging, knowing thriller of the first rank. Written with deep knowledge of global security issues and the world's precarious financial system--and with a timely grasp of Vladimir Putin--this is a novel worth moving to the top of your reading list. A stand-out!"

Bound for Gold (2018)
(Peter Fallon, book 6)
William Martin
"The purest gold for readers! William Martin has always been a fine craftsmanand a marvelous storyteller, and this tale of the 'Golden West' when the gold was real in the hand is fiction at its most enthralling. Framed by a sharply drawn portrait of today, this saga of men struggling over fortunes almost two centuries ago in a rugged and raw America - and their long shadows - is just plain great."