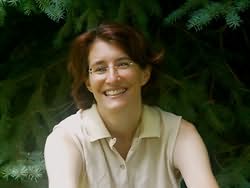 Sarah Prineas is an American fantasy author who lives in Iowa and works for the honors program at the University of Iowa. Her first novel The Magic Thief was published in 2008 by HarperCollins in the United States. As of June 2008, foreign rights had been sold to thirteen other countries. The sequel, The Magic Thief: Lost came out in 2009 and a third book, The Magic Thief: Found came out in 2010. Before she turned to novels, Prineas wrote fantasy short stories for adult markets.In 2008, she donated her archive to the department of Rare Books and Special Collections at Northern Illinois University.

Series contributed to
Spirit Animals: Fall of the Beasts
5. Heart Of The Land (2017)

The Fire King (2011)
(Invisible Order, book 2)
Paul Crilley
"Full of dark wonders and magical delights. I ate up every scrap of this wonderful series and was hungry for more."

The Dragon with a Chocolate Heart (2016)
(Dragon Heart, book 1)
Stephanie Burgis
"In The Dragon with a Chocolate Heart, Aventurine is turned into a girl, but inside she remains ALL dragon, every fierce, lovable inch of her. This story is a delightfully delicious blend of magic spiced with adventure and a heart as sweet and warm as molten chocolate. I completely adored this book!"