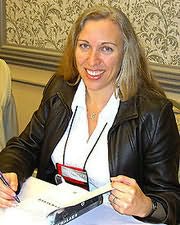 (b.1964)
Kat Richardson is a cross-genre writer, creating a combination of Science Fiction/Fantasy and Mystery/Crime no matter how hard she tries to write something else--although she has tried her hand at a bit of almost everything else, as well. Kat was born in California and survived growing up in a small college town under the LA smog shield long enough to earn a BA in Magazine Editing from Cal. State Long Beach. Kat currently lives on a sailboat in Seattle with her husband, two ferrets, and a very crotchety old cat.

Tempest Rising (2009)
(Jane True, book 1)
Nicole Peeler
"Peeler packs a hell of a punch... bold, bawdy and bright, and breaks the usual paranormal boundaries with sensitivity and style to burn."

Of Blood and Honey (2011)
(Fey and the Fallen, book 1)
Stina Leicht
"I think it's remarkable! It was a compulsive read--I just had to finish it as fast as possible and will be waiting impatiently for the next."

Dead Things (2013)
(Eric Carter, book 1)
Stephen Blackmoore
"Eric Carter's adventures are bleak, witty, and as twisty as a fire-blasted madrone, told in prose as sharp as a razor. Blackmoore is the rising star of pitch-black paranormal noir. A must-read series."