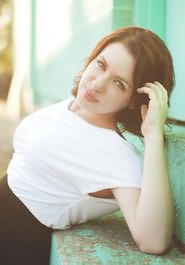 New York Times and USA Today bestselling author, Katee Robert, learned to tell stories at her grandpas knee. Her favorites then were the rather epic adventures of The Three Bears, but at age twelve she discovered romance novels and never looked back.

Though she dabbled in writing, life got in the wayas it often doesand she spent a few years traveling, living in both Philadelphia and Germany. In between traveling and raising her two wee ones, she had the crazy idea that shed like to write a book and try to get published.

Her first novel was an epic fantasy that, God willing, will never see the light of day. From there, she dabbled in YA and horror, before finally finding speculative romance. Because, really, who wouldnt want to write entire books about the smoking-hot relationships between two people?

She now spends her timewhen not lost in Far Reach worldsplaying imaginary games with her wee ones, writing, ogling men, and planning for the inevitable zombie apocalypse.

No Strings Attached (2013)
(Falling for You, book 1)
Nicolette Day
"The perfect combination of sexy and sweet, with a hero who will having you fanning yourself and a heroine who'll make you laugh out loud. This book is a winner all the way around!"

If You Dare (2015)
Jessica Lemmon
"Jesssica Lemmon knocks it out of the park!"