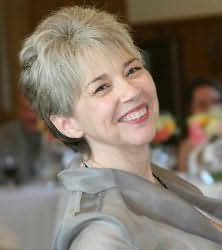 (b.1950)
Mary Doria Russell was born in the suburbs of Chicago. Her parents were both in the military: her father was a Marine Corps drill instructor, and her mother was a Navy nurse. She graduated from Glenbard East High School and later she earned a Ph.D in biological anthropology at the University of Michigan. She was raised as a Catholic but left the church at age fifteen, and her struggles to figure out how much of that culture to pass on to her children fueled the prominence of religion in her work.

Russell currently lives in Lyndhurst, Ohio, a suburb of Cleveland, with her husband, Don. They have a son, Dan

The Fall of the Kings (2002)
(Swords of Riverside, book 3)
Ellen Kushner and Delia Sherman
"Gorgeous prose and a galloping story, with...a deep understanding of a true scholar's passion for his subject."

The Sojourn (2011)
Andrew Krivák
"The Sojourn is a work of uncommon strength by a writer of rare and powerful elegance about a war, now lost to living memory, that echoes in headlines of international strife to this day."

The Super Ladies (2018)
Susan Petrone
"Book clubs of America, uncork the wine and settle in for a great discussion. THE SUPER LADIES is big fun!"