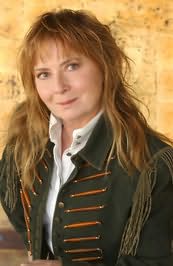 (b.1951)
Melinda Snodgrass was born in Los Angeles, but her family moved to New Mexico when she was five months old making her almost a native. She studied opera at the Conservatory of Vienna in Austria, graduated from U.N.M. with a degree in history, and went on to Law School. She practiced for three years, and discovered that while she loved the law she hated lawyers so she began writing.
In 1988 she accepted a job on Star Trek: TNG, and began her Hollywood career. Her novels, THE EDGE OF REASON, and THE EDGE OF RUIN are currently available from Tor. She and Ian Tregillis have delivered a screenplay to their manager, and she has delivered the first novel in a new Urban Fantasy series featuring blood sucking lawyers, THIS CASE IS GONNA KILL ME. Her passion (aside from writing) is riding her Lusitano stallion Vento da Broga.

Series contributed to
Star Trek : The Original Series
19. The Tears of the Singers (1984)

Planetfall (2015)
(Planetfall , book 1)
Emma Newman
"You've never read a science fiction book like this. A masterful study of mental illness with the ruins of an enigmatic alien race serving as therapist for one of the most unsparingly drawn fictional characters you'll ever read."