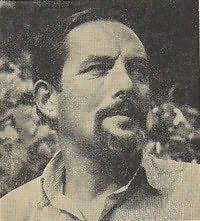 (1912 - 1976)
Sansom was born in London and educated at Uppingham School, Rutland, before moving to Bonn to learn German.

From 1930 onwards, Sansom worked in international banking for the British chapter of a German bank, but moved to an advertising company in 1935, where he worked until the outbreak of World War II. At this time he became a full-time London firefighter, serving throughout The Blitz. His experiences during this time inspired much of his writing, including many of the stories found in the celebrated collection Fireman Flower. He also appeared in Humphrey Jennings's famous film about the Blitz, Fires Were Started- Sansom is the fireman who plays the piano.

After the war, Sansom became a full-time writer. In 1946 and 1947 he was awarded two literary prizes by the Society of Authors, and in 1951 was elected a Fellow of the Royal Society of Literature. He married actress Ruth Grundy.

As well as exploring war-torn London, Sansom's writing deals with romance (The Face of Innocence), murder ('Various Temptations'), comedy ('A Last Word') and supernatural horror ('A Woman Seldom Found'). The latter, perhaps his most anthologized story, combines detailed description with narrative tension to unravel a young man's encounter with a bizarre creature in Rome.