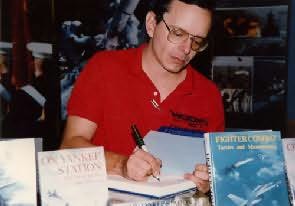 (b.1948)
Barrett Tillman grew up on an Oregon wheat and cattle ranch, where he was exposed to agricultural aircraft at an early age. He learned to fly at age 16 in 1965 and became involved in restoration and flying antique aircraft. With his father he owned and operated two WW II navy planes: an N3N-3 biplane trainer and a Douglas SBD-5 dive bomber. The latter led to his first book, an operational history of the Dauntless. Graduating from the University of Oregon with a journalism degree in 1971, Tillman worked full-time as a freelance writer. In addition to 32 books, he has also written some 500 magazine articles. He founded Champlin Museum Press in Mesa, Arizona, in 1982, and served as managing editor of The Hook magazine in San Diego 1986-89. Since 1990 Tillman has been a full-time writer and novelist. His work has been honored with five awards for history, biography, and literature.