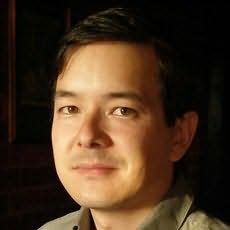 Australia (b.1974)
Shaun Tan was born in 1974 and grew up in the northern suburbs of Perth, Western Australia. In school he became known as the "good drawer" which partly compensated for always being the shortest kid in every class. He graduated from the University of WA in 1995 with joint honours in Fine Arts and English Literature, and currently works full time as a freelance artist and author, concentrating mostly on writing and illustrating picture books.

Shaun began drawing and painting images for science fiction and horror stories in small-press magazines as a teenager, and has since then he has received numerous awards for his picture books, including the CBCA (Children's Book Council of Australia) Picture Book of the Year Award for The Rabbits with John Marsden. In 2001 Shaun was named Best Artist at the World Fantasy Awards in Montreal. He has recently worked for Blue Sky Studios and Pixar, providing concept artwork for forthcoming films.

Genres: Children's Fiction, General Fiction
Series
Leviathan
1. The World and Everything in It (2016)