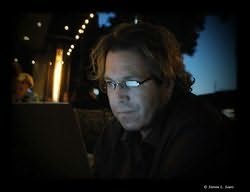 (b.1976)
Peter J. Wacks is a bestselling cross-genre writer and the Managing Editor of Kevin J. Anderson's WordFire Press. He has worked across the creative fields in gaming, television, film, comics, and most recently, when not busy editing, he spends his time writing novels.

Peter, in his editorial capacity, has worked on stories by Tracy Hickman, Kevin J. Anderson, David Farland/David Wolverton, and many others. He has also helped bring some of the seminal works of the 20th century, like Allen Drury's Advise and Consent, back into print.

He has been a panelist, guest speaker, and Guest of Honor at a combined total of over 250 conventions, Trade Shows, organizations, and Colleges - including GAMA, Mensa, & UCLA.

When he isn't working on the next book he can be found practicing martial arts, playing chess, drinking Scotch or IPA, or fighting with swords.

Graphic Novels
Behind These Eyes (2012)