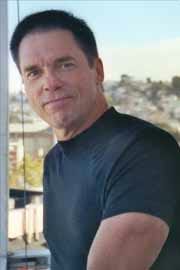 (b.1952)
Robin Wayne Bailey is the author of many novels, including Shadowdance, the Brothers of the Dragon series, the latest Lankhmar novel, Swords Against the Shadowland, and Night's Angel-an omnibus collection of his Frost novels. His short fantasy and science fiction stories have appeared in many magazines and anthologies, including the million-selling Thieves World series. He served for on the Board of Directors of the Science Fiction Writers of America and is a current board member of the Science Fiction and Fantasy Writers Hall of Fame.

He's been a teacher, a musician, a planetarium lecturer, and holds an MA in Literature. His interests include weight-lifting, cycling, and Ryobu-Kai karate. He's a resident of North Kansas City, Missouri.

Fafhrd and Gray Mouser
continued from the original series by Fritz Leiber
8. Swords Against the Shadowland (1998)