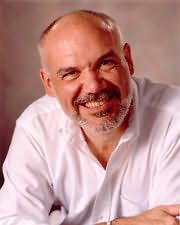 (b.1950)
Bruce Coville was born in Syracuse in 1950. He first became interested in writing when he was in the sixth grade, and started writing seriously at the age of 17. He married in 1969, aged 19, and started collaborating on books with his wife, Katherine Dietz, an artist. They have three children. He had many other jobs along the way, including toy maker, gravedigger, cookware salesman and assembly line worker, finally sticking with teaching until his first book was published in 1977. Bruce has published over sixty books since then and now has more than 12 million copies in print.

Demon Keeper (2007)
(Demonkeeper, book 1)
Royce Buckingham
"One of the most enjoyable books I've read in a long time."

Weave a Circle Round (2017)
Kari Maaren
"Kari Maaren's Weave a Circle Round is deeply engaging, wildly imaginative, and frequently mindbending. Its central mystery grows ever more perplexing as the book hurtles toward its remarkable climax, with final pages that will have readers turning back to the beginning to see how the author has indeed woven her enchanted circle."

The Unicorn Quest (2018)
(Unicorn Quest , book 1)
Kamilla Benko
"The Unicorn Quest draws you into a richly imagined alternate world, keeps you on edge with clever twists and turns, then leaves you breathless as it gallops to its sensational climax!"