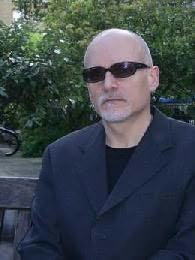 aka Jonathan Grimwood, David Gunn
Jon Courtenay Grimwood was born in Malta and christened in the upturned bell of a ship. He grew up in the Far East, Britain and Scandinavia. Apart from novels he writes for magazines and newspapers. He has been shortlisted for the Arthur C. Clarke Award twice and the BSFA Award for Best Novel seven times, winning twice. He lives in Winchester with his wife, novelist and editor-in-chief of RED magazine, Sam Baker.