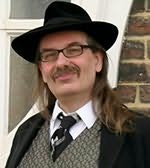 aka Jack Yeovil
An expert on horror and sci-fi cinema (his books of film criticism include Nightmare Movies and Millennium Movies), Kim Newman's novels draw promiscuously on the tropes of horror, sci-fi and fantasy. He is complexly and irreverently referential; the Dracula sequence--Anno Dracula, The Bloody Red Baron and Dracula,Cha Cha Cha--not only portrays an alternate world in which the Count conquers Victorian Britain for a while, is the mastermind behind Germany's air aces in World War One and survives into a jetset 1950s of paparazzi and La Dolce Vita, but does so with endless throwaway references that range from Kipling to James Bond, from Edgar Allen Poe to Patricia Highsmith. In horror novels such as Bad Dreams and Jago, reality turns out to be endlessly subverted by the powerfully malign. His pseudonymous novels, as Jack Yeovil, play elegant games with genre cliche--perhaps the best of these is the sword-and-sorcery novel Drachenfels which takes the prescribed formulae of the games company to whose bible it was written and make them over entirely into a Kim Newman novel. Life's Lottery, his most mainstream novel, consists of multiple choice fragments which enable readers to choose the hero's fate and take him into horror, crime and sf storylines or into mundane reality.

Graphic Novels
Sorry, we're not listing graphic novels by this author
Novellas
Prisoners of the Action (2012) (with Paul McAuley)

Series contributed to
Doctor Who
Time and Relative (2001)

Bad Timing (2001)
Molly Brown
"Molly Brown is the best company imaginable. If you can't get a date with her (and you probably can't), the next best thing is reading her stories - which are funny, creepy, sweet, touching and wicked in equal parts. If you buy this book, you won't regret it in the morning."

The Last Christmas of Ebenezer Scrooge (2003)
Marvin Kaye
"It's a brave soul who writes a sequel to a universally-loved and -known book like A Christmas Carol; it's a rarer man still who does a job as fine as Marvin Kaye of evoking Charles Dickens without imitating him, of extending a story that had until now seemed resolved and delivering a tale which will delight, terrify and affect all readers."