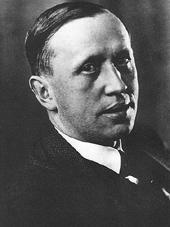 Czechoslovakia (1890 - 1938)
Best known for his play R.U.R. -- (Rossum's Universal Robots). The mechanical robot (a term coined by Čapek from the Czech word "robota" meaning drudgery) opened up a whole new world of Science Fiction, as well as adding a word to the English Language.

Karel Čapek is widely considered the greatest Czech author of the first half of the twentieth century. A novelist, short-story writer, playwright, and essayist, he was a strong dissident voice during the period of fascist buildup in Europe between the World Wars. He wrote a number of satires, as well as the utopian fantasy novel War with the Newts. He died in 1938.
Series
Noetic Trilogy
1. Hordubal (1934)
2. Meteor (1935)
3. An Ordinary Life (1936)