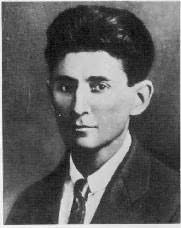 Czechoslovakia (1883 - 1924)
Franz Kafka was one of the major German-language fiction writers of the 20th century. He was born to a middle-class Jewish family based in Prague, then part of Austria-Hungary. His unique body of writing - much of which is incomplete and has been published posthumously - is among the most influential in Western literature. His stories, such as The Metamorphosis (1915), and novels, including The Trial (1925) and The Castle (1926), concern troubled individuals in a nightmarishly impersonal and bureaucratic world.
Novels
The Judgement (1913)
The Metamorphosis (1915)
The Trial (1925)
The Castle (1926)
Amerika (1927)

Omnibus
The Complete Novels of Kafka (2008)