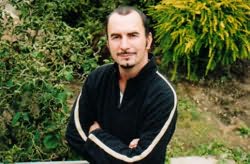 Mark Chadbourn was raised in the mining communities of South Derbyshire. He studied Economic History at Leeds before becoming a national newspaper journalist. He is the author of several novels, including The Age of Misrule trilogy.

Series contributed to
Doctor Who
Wonderland (2003)

The Book of Hidden Things (2018)
Francesco Dimitri
"The Book of Hidden Things is both a mystery and a map. Follow the clues along the trail in Francesco Dimtri's dazzing debut and you'll be ushered into a hidden world of magic, not only within these pages, but also within your own life. Be prepared to be transformed."
Visitors to this page also looked at these authors
Wilbur Smith
Bernard Cornwell
Paul Doherty
Christian Cameron
Orson Scott Card
Simon Scarrow
C J Cherryh
Elizabeth Chadwick
Ben Kane
Julia Chapman
Conn Iggulden
Lynda La Plante
Peter James
Steve Berry
Simon Clark
Joe Abercrombie