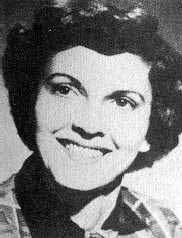 (1918 - 1997)
Mildred McElroy Clingerman was born in Allen, Oklahoma, on March 14, 1918, and moved with her mother and sister to Tucson in 1929. She was a graduate of Tucson High School, and attended the University of Arizona. She married Stuart Clingerman in 1937. Mrs. Clingerman was well-known as a fantasy and science fiction writer, and was widely published in Fantasy and Science Fiction magazine, as well as Good Housekeeping and Colliers. In 1960 she published a paperback edition of her short stories entitled A Cupful of Space. Her stories have also appeared in several anthologies, including literature textbooks for middle and high school students. Mrs. Clingerman was a charter member and a founder of the Tucson Writer's Club. She was also active in the Tucson Press Club, serving several terms on its Board of Directors.
Collections
A Cupful of Space (1961)
The Clingerman Files (2017)