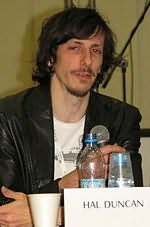 (Alasdair Duncan)
Scotland (b.1971)
Hal Duncan is a Scottish science fiction and fantasy writer based in Glasgow. A graduate of Glasgow University, his first book, Vellum, about a war between heaven and hell, was released by Pan in summer 2005. It has since been translated into several other languages and nominated to the World Fantasy Award and Locus Award. Ink, the follow up, was released in February 2007.

Scar Night (2006)
(Deepgate Codex, book 1)
Alan Campbell
"A gripping, ripping yarn which rattles along at a great pace... fantasy at its best."