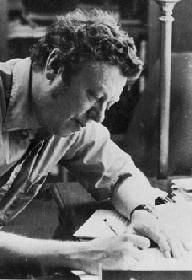 (Gordon Rupert Dickson)
Canada (1923 - 2001)
Gordon Dickson was as influential as Robert A. Heinlein in the creation of the sub-genre of military space opera--his Dorsai! is a significantly more considered work than Heinlein's Starship Troopers. It inaugurated a sequence of Future History novels in which the isolation of colonies has produced specialized sub-species of humanity--dominated by the warrior, the religious, the mystic and the acquisitive temperaments, for example--which produce fertile chaos when brought back into close contact and are the key to humanity's future transcendence; Dickson projected a sequence of historical novels linked to the Dorsai books which through representative figures would clarify his argument--his sympathies and the readers tend to be mostly with the ethical mercenaries of the Dorsai, but Dickson's portrayal and perception of the military virtues is sufficiently complex constantly to wrongfoot our expectations. Dickson's best non-sequence novel is probably Time Storm in which a motley group of adventurers cope with a landscape drawn from all of Earth's history; its charismatic flawed hero has an attractive unhappiness to balance his omnicompetence. A fantasy sequence, which started with The Dragon and the George, sets a contemporary adventurer loose in a magic world at once comic and ethically complex where human beings and dragons share a common culture.

Dinosaur Beach (1971)
Keith Laumer
"Unrivalled not only in its class, but in a class by itself."