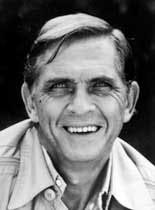 (1924 - 2006)
William Diehl was an American novelist and photojournalist.Diehl was fifty years old and already a successful photographer and journalist when he decided he had not heeded his life calling. The day after his 50th birthday he began his first novel, Sharky's Machine, which was made into a movie directed by and starring Burt Reynolds. Diehl later completed eight more novels, including Primal Fear, which became a movie by the same name starring Richard Gere and Edward Norton. Diehl died at Emory University Hospital in Atlanta, Georgia on November 24, 2006, of an aortic aneurism. He was a resident of Woodstock, Georgia at the time of his death and was working on his tenth novel.

Fall from Grace (1998)
(Jane Candiotti, book 1)
Clyde Phillips
"Hold your breath, Clyde Phillips's unique thriller is a dazzling first novel that moves at warp speed from page one to a breathtaking finale. It's one hell of a ride."

God is a Bullet (1999)
Boston Teran
"GOD IS A BULLET defies description. Nothing I have ever read, nothing, has filled me with the exciting sense of dread and fear I felt while reading this extraordinary first novel. Everything about this book is perfect: the story is astounding, the characters are etched in my brain, the real-time style is riveting, and Teran's dialogue is carved out of granite. It will be a long while before I get this story and these characters out of my head. It is just a terrific experience."