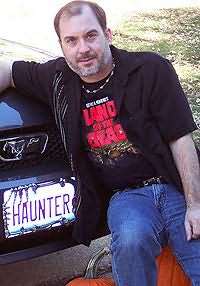 (b.1966)
John Everson is the Bram Stoker Award-winning author of the horror novel COVENANT, as well as its sequel SACRIFICE and the novels THE 13TH, SIREN, THE PUMPKIN MAN and NIGHTWHERE. He has also written several horror/dark fantasy short story collections, as well as a heartwarming collection of CHRISTMAS TALES for the whole family, and a short book for 5-8-year-olds called PETEYBOO AND THE WORM.John shares a deep purple den in Naperville, Illinois with a cockatoo and cockatiel, a disparate collection of fake skulls, twisted skeletal fairies, Alan Clark illustrations and a large stuffed Eeyore. There's also a mounted Chinese fowling spider named Stoker, an ever-growing shelf of custom mix CDs and an acoustic guitar that he can't really play but that his son likes to hear him beat on anyway. Sometimes his wife is surprised to find him shuffling through more public areas of the house, but it's usually only to brew another cup of coffee. In order to avoid the onerous task of writing, he occasionally records pop-rock songs in a hidden home studio, experiments with the insatiable culinary joys of the jalapeno, designs book covers for a variety of small presses, loses hours in expanding an array of gardens and chases frequent excursions into the bizarre visual headspace of '70s euro-horror DVDs with a shot of Makers Mark and a tall glass of Newcastle.

Picture Books
Peteyboo and the Worm (2012)